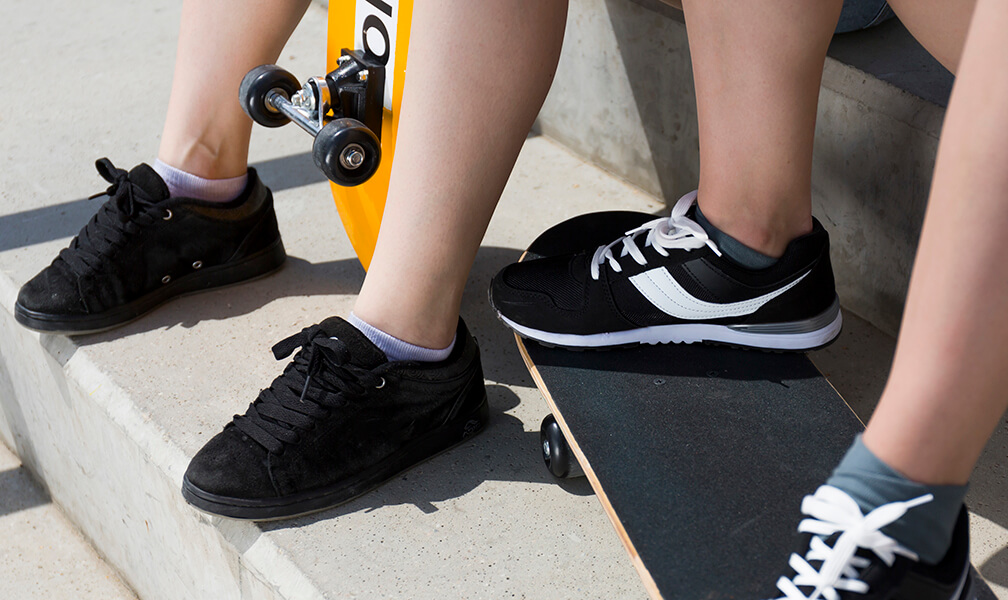 When buying skateboard shoes you want durability, comfort but also style, you want to look and feel good riding them.

Whether you skateboard or not the skateboarding culture has affected modern day apparel.

There are many brands out there offering different types of footwear for certain activities but the fact that larger companies now release their own brand of skate footwear shows the growth and development over the last decade.

So here is a list of 11 popular skateboard shoe brands.

11 popular brands and their skateboard shoes

When I was younger and someone mentioned Nike my initial thought was football,soccer, athletics, skateboarding never really came up but I guess Nike back then wasn’t classed as a skateboarding brand.

Nike in 1997 did try but due to the likes of DC, Globe, eS footwear, Emerica and Vans plus the fact they had little support meant they’d failed.

In 2004 they did relaunch with the brand SB and have now since flourished with the all favourite Janoski’s, Paul Rodriguez also has a shoe with Nike with the likes of Nyjah Huston sponsored by them.

Check out their skateboard shoes at Nike.

Or visit Amazon for their wide range of Nike SB’s.

DC’s were probably one of the first skateboard shoes I bought other than airwalks but we don’t even want to go there haha.

At first, I never understood why they were what I considered so chunky but realising the immense comfort and protection when skateboarding they slowly became a favorite of mine.

DC shoes specialise in action sports such as skateboarding and snowboarding, they also offer apparel, accessories,bags, hats, shirts, and posters.

DC’s was founded in 1994 and was based at Carlsbad CA,  but due to Quicksilver acquiring DC shoes for around US 87million, it’s now located in Huntington Beach CA.

Or check amazon for their wide range of shoes at Amazon.

Full range of skateboard hard and soft goods with the likes of bearings, clothing, shoes and accessories. The Torey is the first signature shoe to be released by diamond footwear.

With over 100 members in their team with the likes of Paul Rodriguez and PJ Ladd.

This company has been around for over 15 years, you don’t expect, you just know that they have maintained a strong focus on delivering the best quality products with high integrity but still keeping to their unchanged roots.

Or check out their shoe line at Amazon.

Etnies was established in 1986 and are Sole Technologies largest company. Etnies footwear brand is located in Lake Forest California.

As soon as  Pierre André Sénizergues joined the company Etnies started emerging as a European brand and he was responsible for designing these shoe models “Senix”, “Lo-Cut”, “Low-Top Rap”, “Intercity” and “Scam”.

The likes of Ryan Sheckler is sponsored by Etnies which proves the credibility of the brand and skateboard shoes.

I’ve only ever heard positive comments on the Etnies for their durability, simplicity and comfort.

Or if you’d like to look at their shoe line check out Amazon.

DVS shoes founded in 1995 and is an American footwear and clothing company that specializes in skateboarding, moto and snowboarding.

Wee man from Jackass has been with DVS shoes for over 10 years releasing the “wee man” signature colorway of the “Jarvis model” designed by Wee man himself.

They’re good. They fit right, they’re comfortable, pretty much everything you expect in a vulcanized sole skate shoe. And though I’m not skating in these yet, DVS suede has always seemed exceptionally durable to me in other skateboard shoes and the quality seems to be maintained here.

Or their shoes at Amazon.

Supra shoe is a relatively new brand launching in 2006.

When I first saw Supra’s I believed they were so different and unique compared to other styles of skateboard shoes.

With numerous celebrities rocking these shoes they’ve definitely given a name for themselves and I do recommend them.

Jim Greco has two signature shoe models “The hammer” and “The suprano”.

I’ve owned a pair of Supra axles and I found the design simple yet effective with good grip and great durability I’m still rocking them nearly 2 years later.

Or check out their shoes at Amazon.

Vans founded in 1966 by Paul Van Doren and James Van Doren and is based in Cypress California, in 1989 Vans was sold for US74.4million.

Vans since 1996 is the primary sponsor for the warped tour which is a traveling rock tour.

Vans offer more than just skateboard shoes, vans sell clothing and other apparel, Vans are worn worldwide and have an amazing following.

They built their first free skatepark in 2014 in Huntington Beach California.

Most of my skateboarding friends prefer the older style of shoes for skateboarding saying the newer models look better but the feel is thinner giving you less protection.

Or view their shoes at Amazon.

Emerica was launched in 1996 and is another company own by Sole Technology, as a skateboard brand they offer shoes, clothing accessories and more.

My friend bought a pair and they are really good shoes that are great for skateboarding, except he finds that they can be rather thin with less cushion for impact.

Or check their shoes out at Amazon.

Lakai was founded by Mike Carroll and Rick Howard in 1999 following them both leaving their position at DC.

Their purpose is to create shoes, designed and inspired by skateboarders which give’s you that pure skateboarding feel.

The overall title is called XLK and this technology will provide improved structural integrity of a cup sole whilst it removes all rubber that’s deemed as not needed.

So head over and check out the Lakai website.

Or you can check out their shoes at Amazon.

Globe was founded in 1985 by 3 Australian brothers with multiple headquarters in Melbourne, Los Angeles, London, Lyon and more.

They specialize in purpose-built apparel footwear and skateboard gear like decks, wheels, trucks and more.

Globe International Limited in 2002 acquired Kubic Marketing that owned World Industries and Dwindle Distribution which at the time was the parent company for skateboarding brands such as Enjoi, Blind, Darkside and Tensor.

This made Globe one of the world’s biggest skateboard companies.

Or visit their shoe brand on Amazon.

Founded in 1995, éS is another son to Sole Technology an American footwear company which specializes in skateboard shoes and apparel.

éS announced a hiatus in mid-2012 but the brand did return in 2014 with special edition runs of their famous shoes.

Or check out their shoes at Amazon.

When deciding on skateboard shoes sometimes the brand isn’t everything I just paid less than $20 on a pair of burgundy Duffs skateboard shoes I’d never heard of them yet after wearing them they are super comfy and extremely durable with a lot of padding don’t be afraid to try something new.

These 11 skateboard brands are just some of many out there with the likes of Osiris, HUF, C1rca, Fallen, Volcom even Adidas have their own brand of skateboard shoes.

Knowing of these shoe brands will allow you to further look and explore more styles of skateboard shoes.

We use affiliate links to support the operation of this website. If you make a purchase, we may receive a commission at no cost to you.

FlitAndDrift.com is a participant in the Amazon Services LLC Associates Program, an affiliate advertising program designed to provide a means for sites to earn advertising fees by advertising and linking to Amazon.com. Amazon and the Amazon logo are trademarks of Amazon.com, Inc or its affiliates.